After his third season of professional baseball, Robbie “Byrd” Tenerowicz knew he needed something. Something that would take his game to the next level, give him the tools he needed to compete and perform with the best athletes in the world, and ultimately accomplish his dream of making the big leagues.

Byrd arrived at Driveline in October of 2019. We did with Byrd what we do with any hitter that comes through the doors of Driveline — we took him through our world-class hitting assessment.

After the assessment, the main areas of improvement we identified for Byrd were his:

Fast forward to March 2021, after 18 months of training, and his swing looks like this now

Pretty big difference right? Check out these data gains too:

He swings the bat faster, hits the ball harder, and produces more batted balls in optimal launch angles. All of these are desirable traits for being good at baseball. Let’s hit the rewind button for a second and dive into how Byrd made these changes.

We’ll start with his bat sensor data. The main metrics we are looking at with Byrd are his average bat speed, average attack angle, and peak bat speed.

Although Byrd was an above-average performer during his time in the minor leagues, the lowest hanging fruit for him was definitely improving bat speed and adding loft to his bat path. For training bat speed, we utilized a lot of concentrated bat speed training/programming with the Axe Bat Speed Trainers.

We addressed his low attack angle by fixing some posture issues he had in his mechanics (see K-Vest section). The results for both his bat speed and attack angle were outstanding.

Byrd’s increase in bat speed has given him the ability to hit the ball harder than he did before, and raising his attack angle from 4° →  15° allows him to hit for more power than he has in previous seasons.

*Note on attack angle. Although Byrd needed to make attack angle adjustments and raise his average attack angle, 15° is likely a little high in comparison to where he would live in the game. In the context of a training environment, (where we are occasionally solely focusing on bat speed or optimal ball flight) attack angles are typically higher than what we see in a live-at-bat setting. I would expect his in-game attack angle to live anywhere between the 8°-12° range.

Now let’s take a look at Byrd’s batted ball data from his assessment week. The main metrics we’re looking at here are peak exit velocity, average launch angle of hard-hit balls, and average exit velocity. What we saw with Byrd was a hitter who did not hit the ball hard enough, and when he did hit the ball hard, he’d hit it at a ground ball trajectory, which is not ideal for success.

However, when we look at Byrd’s recent batted ball data, he’s made substantial progress in all of the targeted areas.

His batted ball changes are highlighted by improvements to the following metrics:

By executing a bat speed program and making a slight adjustment to his swing plane, Byrd improved the quality of his batted balls. His increased bat speed led to a substantial increase in peak and average exit velocity. Raising his attack angle from  4° → 15° makes it possible for him to elevate his average launch angle of hard-hit balls. More exit velocity + line drive ball flight = productive batted balls.

When Byrd came to Driveline in September 2019, his K-Vest graphs revealed posture issues that were making it difficult for him to hit the ball hard and in the air consistently. The K-Vest metrics we addressed in his swing were: 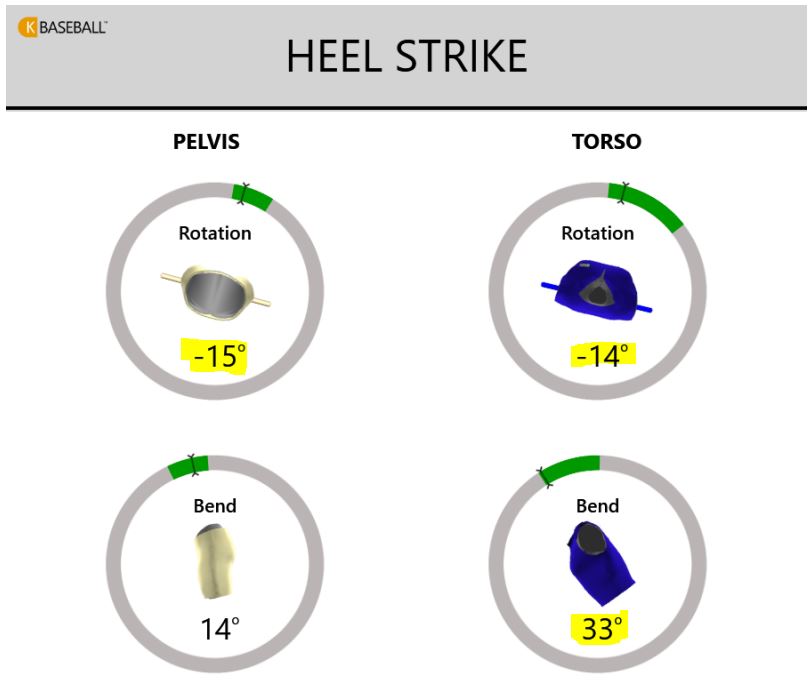 In order to fix these issues, we laid out a detailed plan of attack that is best summarized by clipping one of the training log entries we wrote for him in October 2019.

What we are looking for in the upper body graph above, is equal values of torso forward bend, side bend, and rotation and side bend at contact will be greater than or equal to forward bend at first move (equal on a pitch at the top of the zone and greater than for pitches lower). So, if you have very little torso forward bend as you begin to rotate towards the ball, it is unlikely you will create enough side bend to rotate on plane with pitches lower in the zone. Below is an example of an efficient upper body graph for reference.

You demonstrate very little forward torso bend while maintaining a significantly higher value of anterior tilt of the pelvis. This means you are arching your low back to load yourself rather than rotating the pelvis. Low values of torso bend can be associated with standing very tall at the plate and a lack of hip hinge. This is important to your swing for multiple reasons.

The information on your swing mechanics and batted ball profile is meant to provide context and awareness to issues, but executing this plan will be all about intention and developing a routine to sustain these changes to your body and mindset.

Suarez at roughly the same point in the swing. More side bend of the torso and pelvis, creating more loft in his bat path deeper in the zone in comparison to your bat still having to travel quite a bit further before the upswing starts.

Correa creating loft in little earlier in his swing with shoulders rotating more underneath each other. This is a product of added forward bend and maintaining spine angle throughout the swing.

Byrd’s previously mentioned swing flaws are best visualized by looking at some of his swings from the minor leagues. Homerun? Yes. Good swing? Kind of, but not really.

Hit the fast forward button, and below are some of his swings from training. In these swings, there is noticeably more torso forward bend at heel strike, and he maintains his posture – replaces forward bend with side bend – much better than he did before. You’ll also notice his bat path improvements. With his increased attack angle, he’s now able to create loft with his swing on pitches down zone, and his improved swing depth gives him a larger point of contact range to make flush contact.

The mechanical improvements become even more prominent when looking at pitches on the inner half of the plate.

Lastly, a couple of side-by-side comparisons illustrate these mechanical improvements even further.

In this visual, we can see noticeably more forward bend and side bend of the torso in the swing on the left which allows for a deeper entry into the zone and an ability to adjust to the pitch with posture rather than just throwing his hands at the ball.

Re-tooled, revamped, and rejuvenated, Byrd made his way down to spring training 2020 with the Tampa Bay Rays. However, after just three weeks, spring training was cancelled because of Covid-19. Pretty tough blow for a guy who was ready to roll. Nonetheless, Byrd returned to Washington to continue what he’d started. After being back for a little less than a month, Byrd got a phone call from the Rays letting him know that he’d been released. Boom, that one hurts. Another tough blow, but definitely not enough to stop Byrd from continuing to get better. With Driveline closed because of Covid, we got back to work outside. Even with an uncertain future, Byrd continued to improve and re-tool his swing every single day.

Getting Ready for the 2021 Season

When Driveline re-opened at the end of the 2020 summer, Byrd’s swing, approach, and mindset were in as good of a place as they’d ever been. He continued his development, and the Reds took notice and signed him to a minor league contract. With a place to play and a new swing, a lot of the training leading up until spring training was geared towards maintaining and challenging his new patterns and approach. This meant hitting in fast-paced and game representative environments. For an example of what this looks like, here is a clip from a fastball training session, where we had the machine set at 95mph, 12:30 spin axis, and 2500 rpm.

The idea here was that we wanted to stress test Byrd’s new swing and make his new changes even more “sticky” for when spring training, and ultimately the season, rolled around. One of Byrd’s most memorable training highlights came when he finally accomplished his goal of hitting a ball over 110 mph.

If this doesn’t fire you up…make sure you check your pulse. He’s since hit a ball 111.1 mph, but the first one over 110mph always hits a little bit different. After 18 months of training at Driveline, we finally uncaged the Byrd and sent him off to spring training, where he could spread his wings and fly…

After a successful Spring Training, Byrd has started the 2021 season with the Double-A Chattanooga Lookouts. Safe to say, all of us here at Driveline are very excited to watch him perform this year!

For some closing remarks, I’d like to reconstruct Byrd’s training timeline:

That’s 18 months of training without playing a competitive baseball game…18 months! Byrd is proof that baseball players can be developed if they expose themselves to the right training/information and put in the work every single day. Action expresses priorities, and if you want something bad enough, your actions will follow suit.

Make the best decision of your career. Both in-gym and remote options are available.