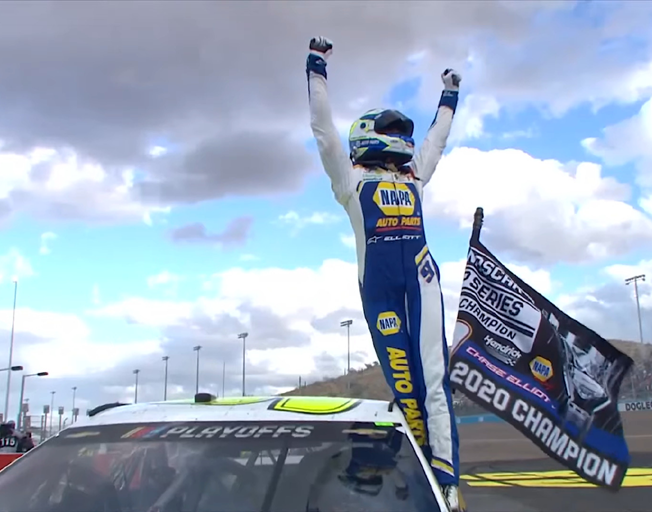 Four drivers started the Season Finale 500 with a chance to win the 2020 NASCAR Cup Series Championship. The youngest of the four drove from worst to first to claim that title at Phoenix Raceway.

Chase Elliott was earned the pole starting position in Sunday’s (11/8) NASCAR championship race after scoring a must win last week in Martinsville to make the Championship Four. However, he failed pre-race inspection twice forcing him to start the race from the back of the field.

Joey Logano, Brad Keselowski and Denny Hamlin were set to start in positions two through four respectively. However, following the penalty for Chase, they started in positions one through three instead.

Joey quickly made a statement that he was there to win the race and championship. He led all but one of the 75 laps in stage one of the race to claim the win in that stage.

Amazingly Chase raced his was from the back of the pack to finish in third place for stage one. That was the first statement made by Chase in this race.

In stage two of the race Chase made his second statement. That statement was he was there to win the race and championship as well. He was able to take the lead five times for a total of 45 laps. However, on the final lap of stage two Brad Keselowski was able to get by Chase coming out of turn four to claim the win of the stage.

In the third and final stage of the race Chase regained the lead almost immediately on the re-start and spent 65 laps out front. He lost that lead for just nine laps. He regained the lead and held it for the final 43 laps. Chase ended with a race high 153 laps out of the 312 lap race as the leader.

Of the course the only lap that really mattered was the last lap. Claiming the win of the Season Finale 500 helped Chase make NASCAR history. Chase becomes the third youngest NASCAR Cup Series Champion ever behind Bill Rexford in 1950 (23years, 7 months, 15 days old) and Jeff Gordon in 1995 (24 years, 3 months, 8 days).

The win in Sunday’s Season Finale 500 gives Chase a total of five wins for the 2020 season of which three were during the playoffs.

The other three championship contenders finished in positions third through fourth. Brad Keselowski claimed the runner-up finish. Joey Logano finished in third place and Denny Hamlin in fourth place. Jimmie Johnson ended his NASCAR Hall of Fame career in fifth place of his final race as a full-time driver. See the complete race results for the Season Finale 500 here.

The next point race on the schedule for the NASCAR Cup Series is the Daytona 500 February 14th, 2021.