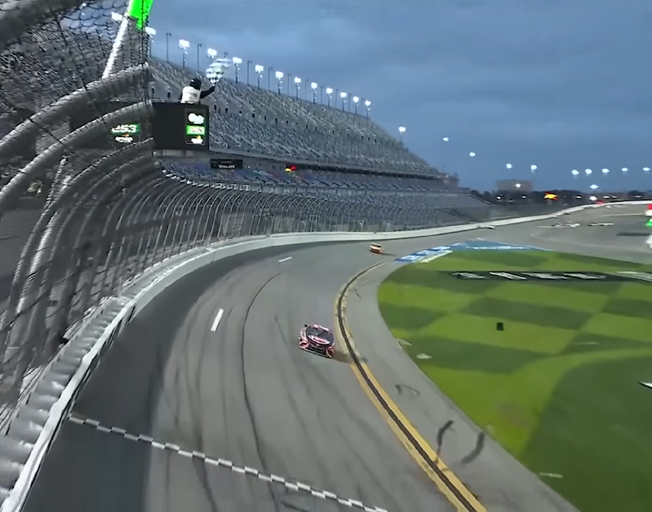 Chase Elliott started the race as the favorite to win. He is the defending NASCAR Cup Series Champion. He has won the last four road courses held in the Cup Series over the past two years. Those wins included last year’s race at the Daytona Road Course, the first ever Cup Series race on the course.

Chase appeared to be living up to that prediction as the likely winner of the race for most of the race. He led a race high 44 laps as one of seven drivers to exchange the lead 12 times. In fact, Chase looked to be building a comfortable lead following what would be the final green-flag pit stops when Mother Nature decided to make an appearance in the race.

With 15 laps remaining NASCAR issued a yellow flag due to rain on a section of the road course. This was done to give the teams the chance to put on rain tires if they wanted to. Most of the cars pitted, but put on fresh slick tires instead of rain tires. Quite a few drivers remained on track and did not pit at all. This put the car that had been dominating the race back in the middle of the pack for the re-start and only 12 laps to make it back to the front. That would not happen as Chase would finish the race in 21st position.

Joey Logano was one of the cars that did not pit and re-started the race as the leader. He was able to race out to a decent lead even on old tires. Christopher Bell was one of the cars near the front all during the race. He did stop for tires and would have to race through traffic to get back to the front with a chance to win.

Christopher kept racing forward until he was able to get behind Joey Logano and pass him for the lead coming to the white flag and final lap of the race. Christopher made no mistakes on that last lap around the 3.61-mile road course to claim the win. It was the first NASCAR Cup Series win for the driver in his first year in the #20 Toyota and second year as a full-time Cup Series driver.

Joey Logano held on to finish in second place with Denny Hamlin in third place. Kurt Busch came across the finish line fourth and Brad Keselowski rounded out the top five. See the complete race results for the O’Reilly Auto Parts 253 At DAYTONA here.

The drivers and teams have a short drive to next week’s race from Daytona to Homestead-Miami Speedway. The Dixie Vodka 400 will take place Sunday, February 28th.

5 drivers who should already panic in 2021

NASCAR dug their own hole with Kyle Busch’s response